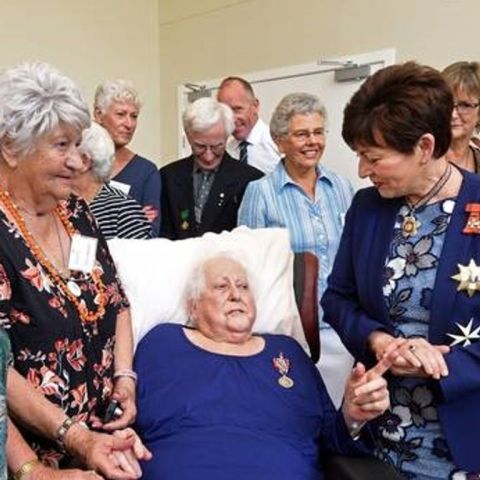 "How about a high-five?"

That was volunteer extraordinaire Heather McLean's first reaction to having her Queen's Service Medal pinned to her chest by Governor-General Dame Patsy Reddy in a special investiture ceremony at Waipuna Hospice yesterday.

McLean's medal, awarded for services to genealogy and historical research, was announced in the 2019 New Year Honours.

When it became apparent that 81-year-old McLean, who has terminal cancer, could not travel and may not have much time, her longtime friend Helen O'Connor arranged the special ceremony.

It was held in the hospice lounge, with the guest of honour surrounded by around 30 family members, friends and colleagues met over more than 40 years of volunteering in the heritage sector.

Her commendation was read aloud, noting her many years of work with, among others, the New Zealand Society of Genealogists, the Mormon Church's Family History Centre, the Pyes Pā Cemetery office and the Tauranga City Library.

Notable contributions included decades of transcribing headstones in Bay of Plenty cemeteries for the benefit of family historians and researchers, and completing a database of air-related deaths from 1899 to 2016.

Dame Reddy said McLean and her work had been a source of inspiration, encouragement and motivation for many others.